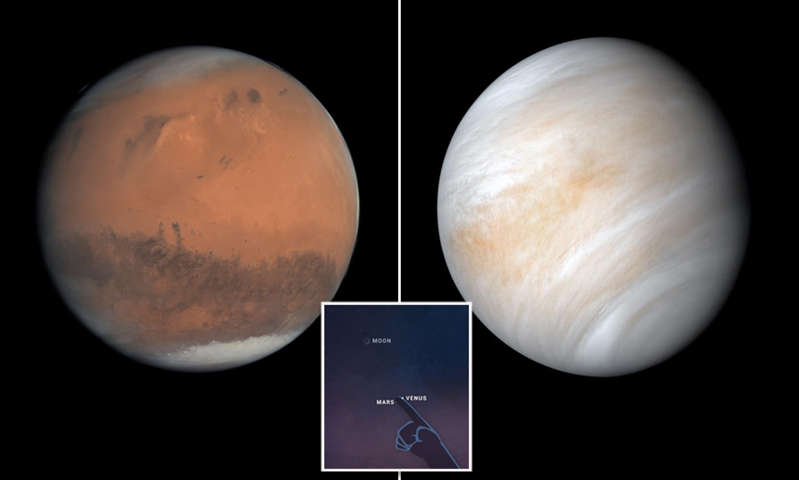 Last week all five naked-eye planets were visible, this week we’re down to four, and soon it will be three.
The brightest planet is the poetically-named “evening star” – Venus. Look for it in early evening twilight when it’s low in the west. The best time to look is about an hour after sunset, when it’s as high above the horizon as the sun is below, but you can see it much earlier. You can even see Venus during the daytime if you know precisely where to look and block the sun from view. To do this, find it early one evening and then look earlier the next night and even earlier on succeeding nights until you can see it before sunset – and amaze your friends by pointing it out.

Telescopically Venus is disappointing. Its thick white clouds shroud the planet so that all you see is a featureless white disk. Venus is beyond the sun, some 130 million miles from earth, and it has a slight gibbous phase 87% illuminated by the sun. This autumn, when it has moved to between the earth and sun, it will have a more interesting crescent shape.

Venus’ orbital motion around the sun is carrying it near more distant Mars. On the 12th they’re at their closest, only 1° apart, in one of the year’s finest conjunctions. Unfortunately smaller, more distant, and darker Mars is only 1/200th as bright as Venus, so I recommend using binoculars. Don’t miss this conjunction.

After the 12th Mars is to the lower right of Venus and their separation increases noticeably night-by-night. On the 18th they’re still only 3° apart and both will fit in the view of binoculars.

Mars sets 4 minutes earlier each night, and not being all that bright to begin with, we’ll lose it to view by the end of the month.

The bright star that Venus is approaching is Regulus, in Leo the Lion, and it’s slightly brighter than Mars. Venus passes close to Regulus on the 20th.

Saturn rises around 10 p.m. and Jupiter and hour later, and by midnight they’re both high enough to see. Jupiter is far brighter; Saturn is to the right or west of Jupiter. Last December they were almost touching but half-a-year later they’ve separated by 20° — and they’ll continue to separate as Jupiter moves on ahead, traveling faster in its orbit around the sun.

The Sky Report is presented as a public service by the Stellar Vista Observatory, a nonprofit organization based in Kanab, Utah, which provides opportunities for people to observe, appreciate, and comprehend our starry night sky. Additional information is at www.stellarvistaobservatory.org. Send questions and comments to
John@StargazingAdventures.org.

About the Author: John Mosley

John Mosley was Program Supervisor of the Griffith Observatory in Los Angeles for 27 years and is the author of “Stargazing for Beginners” and “Stargazing with Binoculars and Telescopes”. He and his wife live in St. George where he continues to stargaze from his retirement home while serving on the advisory committee for Stellar Vista Observatory.